Why yes, now that you come to mention it, I believe I am.  Why do I sound so surprised by that?  After all, obsession is my brain’s default mode.  It’s not as if I discovered this only recently.  But there you have it: Lisa + obsession = surprised.

So it’s been just over a week since I had The Talk with my friend about my blogging, and decided to alter the way I approach it.  Since then I have posted four times in the last week - a bloody miracle!!  It usually takes me a lot more than a week to write one thing.  Last year I only managed to post four times in total - FOUR TIMES IN FIFTY-TWO WEEKS! - so I’ve already equalled that amount, and am about to surpass it in one month.  I must have had a REALLY bad year last year, ‘cos I also only managed to paint one picture, so I can’t blame it on the fact that I was doing more painting.  Bugger.

But it’s not only that I’ve posted more, there are also the photographs.  I can’t believe I’ve not tried that before!  It’s so much fun.  What is wrong with me that I’ve not thought to do it until now?  It’s not as if I haven’t seen other people doing it on their blogs.  It seems that nearly everyone does it.  And I like it.  It brightens the place up, makes it look more interesting than just a lot of words on a page.

But no, for some reason to do with my one-track brain, I decided that I was going to stick to one form of illustration, and that was with my painting.  Keep it all uniform; boring; rigid.  Makes it a bit difficult as well when I’m not actually doing any painting.  I think I thought that this would serve as some kind of motivation for me to do more.  Yeah, that went well.

So yes, I’m obsessed with blogging.  It only took me ’til a week later to realise it.  But I got there.  And then I started worrying about it ‘cos obsessing is bad, right?  And what would happen if/when I lost interest (as I usually do), and then reverted to how it was?  How could I stop that from happening?  Blog more.  Panic blog.  Obsessively blog!  Hello?  Wasn’t that the thing I was worried that I was already doing?  Are there any brain cells at all inside my head not running around deliriously without a clue, like little people with their arms flailing about in the air?  Is anyone in charge up there??

I have a problem with the word ‘obsession’.  I will talk about being excited or enthused, but not obsessed - unless it relates to something negative, and then I will happily whip it out to beat myself around the head with.

I have come to associate it with negative connotations (due to a great extent to my time around the AA community), so I assume that it is a bad thing, which needs correcting.  To admit that I am obsessed is to admit that I am somehow at fault; that I am doing something wrong; that I have ‘allowed’ myself to get distracted by something that invokes the obsessive gene in me; that I am not using or applying my 12 step programme correctly.

And what also confuses me, and makes this worse, is the fact that neurotypicals of all descriptions (even alcoholics, and suchlike) use the word arbitrarily, usually to describe something they’re really into - which sounds like what I’m experiencing, but isn’t quite.  But I just can’t explain what it is that’s different, so it sounds like I’m making a distinction based on a false technicality, in order to excuse myself for something which I think I should, actually, be able to get over if I really wanted to.

You have no idea how much I’ve really wanted to get over the way my brain works (or maybe you do, especially if you’re autistic or have adhd).  Except that the way that I stop obsessing about one thing is to move on to the next: there’s no break from it, no interim period of ‘normal’ thinking.  Just one thing after another.

Now to a non-autistic this might sound really awful, or sad, or limited, or any number of things.  But the fact is that, unless I’m obsessing about the fact that I obsess, I don’t actually notice it because it is just the way I think: it’s as natural to me as breathing.  There is no ‘obsessive gene’, as such, which only gets triggered by certain things.  It’s not the things that cause the problem, but the brain.  I just think this way about everything.

Nor is it always a problem to me, unless the thing I get obsessed with is negative, or leads to something negative (like internet trawling), or someone points it out (to basically let me know that I’m boring the arse off of them).  And then I start worrying about it: obsessively.  Endless fucking cycle.

So, I have a pattern.  Lock onto something (yoga, for instance); get consumed by it (read, think, talk, possibly do if it’s action-based); either lose interest and move onto the next thing; or integrate it into my life, and gradually (hopefully) lose some of the initial intensity of the obsession.  This is what happened with yoga, and I now mostly just do it, and don’t talk or read about it because that just serves to fire up my obsession.

Much as I hate to admit it, I haven’t got a fucking clue how to manage this thing.  My go-to solution is always to follow a plan (another bloody obsession of mine - plans!), and the one thing guaranteed to fail is a plan.  I have yet to find a satisfactory method for dealing with this, other than the vague notion that I should be turning it over to God; but then I have no clear idea how that translates into practical action.  I’m not even certain that what I’ve just written about it in this post is correct.  What appeared to be a perfectly logical explanation seems to get all wobbly once it’s outside of my head.  Ho hum. 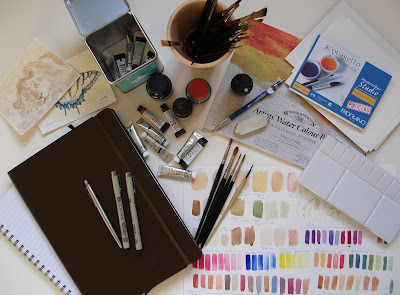 But apart from the whole issue of obsession, I have enjoyed my new-found enthusiasm for blogging this week.  I just would like for it to continue, and not to burn out from being so hyped-up.  I fear that the word with which I have but a fleeting acquaintance, in both understanding and practice (‘balance’), is going to make an appearance somewhere as part of the solution.

I wish you peace and joy (and balance!) in your life.

Posted by Lisa - The Artistically Articulate Autistic at 4:34 pm