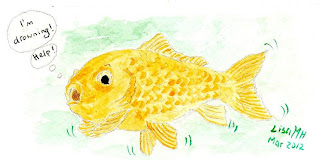 Apparently goldfish have such a short attention span that by the time they’ve made a circuit of their bowl (all of thirty seconds) they’ve forgotten that they’ve been there before.

Sounds vaguely familiar. Having ADHD is probably quite similar to being a goldfish, I imagine. I’d just rather it were something a little more dynamic and exciting - like the speed of a cheetah, the eyesight of an eagle, or the agility of a snow leopard. Having the attention span of a goldfish is rather lacking on the pizzazz front, don’t you think? A bit like having the body odour of a skunk.

Actually this is not quite an accurate description. Skunks don’t have body odour, per se. What they have is the faculty for secreting a foul-smelling odour to deter predators: which, on second thoughts, sounds like it could come in really handy, in lieu of a talent for martial arts with which to pummel them to death (the predators, I mean, not the skunks). However, I do foresee a slight problem with this ingenious idea – the autistic inability to determine who are the predators, which could lead to living in a permanent state of ponginess. But it’s one way of keeping the general population at bay, thereby minimising the potential for mind-bogglingly confusing interaction. Could be a bit of an extreme solution, though.

Goldfish apparently also have a very brief short-term memory of three months (though to a goldfish this could possibly equate to something like half a lifetime). This concerns me gravely, as I find myself worryingly identifying once again with these dynamos of the marine world: having, as I do, a short-term memory that appears to contain more holes than a meshless sieve. It also leads me to wonder how people have worked this out about goldfish when, as far as I am aware (and my knowledge is extensive – er, not!), they cannot communicate. Or perhaps those little bubbles that come out of their mouths are speech bubbles? Whatever the case may be, I’d say it’s much like a neurotypical attempting to work out what an autistic is trying to convey, and vice-versa.

Confusingly for me I also have the long-term memory of an elephant. This perhaps explains why my short term memory is not so good – the goldfish in me gets trampled to death by the pachyderm, as it blindly blunders about randomly sucking up facts to keep locked up in its trunk. Or make that trunks, since I’m seemingly in the possession of not just one trunk-load of information, but a complete bloody battalion. In which case you’ve got to wonder whether I’m in the possession of not just one elephant’s memory but a whole gargantuan parade.

Whatever the case may be, I do wish sometimes that they’d just bugger off ‘cos they don’t half make a lot of noise about it. And another thing – I wish someone would take the lead up there and get some order going. It’s like a random duck-shoot - I never know what I’m going to target next. But then I don’t think elephants are really designed to use shotguns, are they, so it’s no wonder I keep getting blasted in the process.
Posted by Lisa - The Artistically Articulate Autistic at 3:52 pm

... want to be alone, it seems, according to some people. They appear to have some difficulty in making the distinction between being alone and being lonely. The minute they find out that you live alone, or spend a great proportion of your time by yourself, there is a tendency to jump to the conclusion that you must, therefore, be lonely – probably because they imagine that they would be, in the same circumstances.

And it’s no good denying that this is the case, and launching yourself into a long explanation as to why you choose to live a solitary life, and how happy you are with your situation. This will simply be taken as evidence of just how unhappy you are: “The lady doth protest too much, methinks,” as Shakespeare put it.

Of course, just because he said it, or, rather, set it down irreversibly on paper, does not make it true. But try convincing my brain, which encases words in blocks of concrete the minute they are set adrift into the cosmos.

Nor should you ever utter the fatal words “I can’t, but I would if I could”, cos this automatically implies that you feel left out, sitting on the outside looking in, like an orphan child longingly watching families together, and wishing they could be part of one of their own.

It’s a totally inappropriate statement which suggests a feeling of deprivation, a state of being which doesn’t exist except in my mind when I drift away from my true nature and allow myself to entertain the ideas that other people have put in my head. How, in the name of arse, do I know that I would if I could when I never have been able to, nor shown any great desire to do so? The only time I feel deprived is when I’ve been told that that’s how I should feel.

Then, of course, there’s the inferiority complex theory. I’ve come across this frequently as a consequence of spending a lot of time in recovery circles, mostly going round in circles. And no, a recovery circle is not a round rubber thing that you throw over your head to save you from drowning.

This theory is usually applied to people who view themselves as loners - the ones who feel themselves to be on the outside of society, not worthy enough to join in. Alcoholics are often in that group because of the shame and guilt associated with their illness. And, as an alcoholic, I of course got clumped in, and wholeheartedly embraced the idea that this was the reason for my preference for my own company. What else could it be? Unbeknown to me I was just doing the autistic thing, and copying. Didn’t know it at the time, but I do now.

And what I know now is that, contrary to all the recovery talk on the subject that I learned, I actually do like being on my own. In fact, it’s the only way that I can live and be happy, and not end up gibbering like an idiot at the end of the day due to overexposure to the world outside and its over-stimulating influence. You only have to look at what happens to me when I let the world out there into my life via the web, to know that there’s gonna be a catastrophe when I have to meet it head-on, in the flesh. As the Boy Scouts say, “Be prepared.”! Unfortunately, I can’t ever be prepared enough to deal with what’s out there.

Why do people think that there’s something wrong with you when you prefer to spend most of your time in your own company, doing things that you enjoy, rather than doing something that we are told that we are supposed to enjoy? It’s as if people expect that, just because you happen to be human, you must have an innate desire to socialise. They also appear to expect that it’s an intrinsic skill that everyone has, and that the only reason I don’t do it is because I am being a bloody-minded, anti-social, miserable grump, and I could if I just tried hard enough.

Well, I’ve tried hard enough – for most of my life I’ve been trying, and it hasn’t got any easier. Nor has it turned into a joyous activity that I anticipate with a frisson of excitement every time I have to contemplate doing it. More on a par with having to go to the dentist to have all your teeth removed. Without anaesthetic.
Posted by Lisa - The Artistically Articulate Autistic at 8:02 pm