“It slowly surveyed the whole field, and then decided to plan out a nice, relaxed day for itself.  A little trot later on, it thought, maybe around threeish.  After that a bit of a lie down over on the east side of the field where the grass was thicker.  It looked like a suitable spot to think about supper in…
Good.
An excellent plan.
And the best thing about it was that having made it the horse could now completely and utterly ignore it.  It went instead for a leisurely stand under the only tree in the field.”

I came across this particular quote this morning as I was reading this book (well I wouldn’t have found it had I been reading some other book, so that’s a bit of a redundant statement, but anyway…), and felt it described so perfectly and succinctly the particular way my brain works when it comes to the issue of planning that I just had to share it.

I try to make plans.  Sometimes I make them complicated, with a long series of instructions to follow.  Sometimes (though, admittedly, not often) I make them simple, using a short suggestion.  Whichever way I try, the inevitable result is the same - I, for some unfathomable reason, end up completely ignoring them and doing the opposite.  The minute I form any word or thought which vaguely resembles some kind of plan, guideline, or even a nebulous desire as to what I’m going to do, or want to do, then I can basically kiss goodbye to seeing it come to fruition any time within my conscious present.

Which basically seems to mean that in order to get anything done I have to be in a state of unconscious awareness (or conscious unawareness?) of what it is I’m trying to achieve, because my brain appears to be wired to purposely contradict my instructions.  It “thinks” it knows better than me.  And perhaps it does?  Perhaps, like the horse, I should simply go with it - enjoy myself making a plan, and accepting that at the end of what is essentially a pleasant bout of idle daydreaming I’ll simply discard it and do something else.  The horse seems perfectly content with this idea, so perhaps I  would be too if I simply embraced it, rather than agonising over why this happens, and trying to force it not to do so.

Lesson for today - nature has many lessons to teach us especially about going with the flow, and even horses have wisdom to impart.

(And before anyone feels compelled to point out that horses don’t think like people, and that the horse in this book is not real but a figment of the imagination of Douglas Adams, I know.  Thanks.  I’m literal, but not quite that literal.  Well, not all the time, anyway…)

Posted by Lisa - The Artistically Articulate Autistic at 12:01 pm

A Pain In The Art 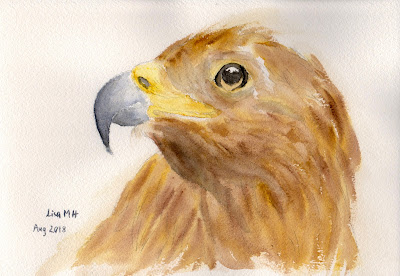 Here's my latest painting, which I managed to knock out after a whole lot of the usual lack of self-belief, anxiety-induced executive functioning deficient dithering and inertia (a new thing about which I was recently made aware), which is produced whenever I'm faced with the prospect of needing (even wanting) to put paint to paper.

I may not be improving when it comes to how I feel about my painting, but I have got better at believing in my ability to draw - so, in order to postpone the "dreaded deed", I simply drew a number of things until I felt suitably girded in the loins to take the plunge and get out the painting gear.  And here's the result.

Of course I wasn't happy with it, and gave a running criticism of it while I was doing it - it will be a miracle if the day ever comes when I am, and I don't.  Nor did I particularly enjoy doing it, because I was so fucking uptight and anxious about whether I was getting it "right", and doing it "properly" (those words are the bane of my existence: I shall have them engraved on my gravestone - 'She died right, and properly: indeed, she was a right proper charlie').

I know "great" artists are often depicted as tortured, hyper self-critical souls, being driven by the unrelenting need to improve and perfect their art, which is often seen as a sign of their greatness, but I didn't want to be one of those kinds of artists who suffered for their art.  I mean, for fuck's sake, I don't know how they ever managed to get anything done if they suffered anything like the bloody insecurities and almost catatonia-inducing fear of making mistakes which I do.

Perhaps that's the point, though.  Perhaps they don't feel the same.  Perhaps they aren't driven by the same things.  Perhaps at their core they believe that they are great, and they're driven to prove it; and what they fear is being proven to be average.  Me, I have no sense of my own ability, so I constantly seek to measure it against other people - which means I end up trying to copy them, trying to follow directions which I don't fully comprehend (but think I do), and trying to adjust myself to suit another person's modus operandi.  So whenever I pick up a paintbrush it's like there are two people with me at the easel - there's me, and there's whoever is the latest 'guru' artist to whom I've taken a shine, both fighting to stamp their mark on the paper.

I often find myself  wondering whether I'm lying to myself when I say that I love painting.  I mean, you wouldn't think this was the case given the torturous (and tortuous) process I have to go through to motivate myself to do it.  It's like pulling teeth without an anaesthetic.  Perhaps I should just use a bit of reverse psychology, and come out and say, "I FUCKING WELL HATE PAINTING!!!", see if that changes anything.

Perhaps, though, it's not that I hate painting, but rather that I hate painting the way I think other people paint, or the way I think that other people would tell me I should paint.  After all, I am (annoyingly) also oppositionally defiant, so if I even feel as if I'm being expected to do something (yes, even if it's something I want to do) then I automatically will do the opposite.  Don't ask me why - it's one of the great, unfathomable, frustrating mysteries of my personality, which makes me want to tear my head off and stamp on it.

So, you want me to paint - I don't want to; you think my paintings are great - I think they're not good enough, probably never will be, and all I can see are the mistakes I made; you think I'm a good artist - I think I'm average, and not as good as... (insert long list of artists' names here), and never will be.  It makes me wonder how I've managed to produce anything at all with a brain like mine.  I should just go and eat worms.
Posted by Lisa - The Artistically Articulate Autistic at 3:58 pm