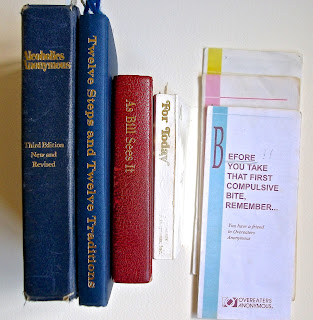 “No person likes to think he is bodily and mentally different from his fellows.”  Big Book, page 30

You know what amazes me about the Big Book?  The fact that, if you break it right down to its individual, component sentences, you can see its relevance to the whole human experience.  You don’t have to be alcoholic (or have any of the other illnesses that traditionally share the 12 Step Programme) to find something of value or usefulness.  You just have to be open-minded - another way of saying not rigid in your thinking (which explains why I have a difficult time with this concept).

Obviously, the original application of this statement is meant to reference the difference between alcoholics and non-alcoholics; but for me, right now, its relevance is in regard to the difficulties I’m having with accepting that, as an autistic (with adhd thrown in as a bonus), I am differently-wired to other people.

First of all, I’d like to note the use of the word ‘different’.  There is no moral judgement in that word, no condemnation - which, as alcoholics, tends to be something we’re accustomed to either hearing from others, or applying to ourselves: that we’re somehow weak, bad, worthless, damaged, faulty, useless, abnormal, etc, and it’s essentially all because we can’t control our drinking.  When you really think about it, how daft is that?

Well, a similar thing applies to being autistic, and having adhd.  Some of the judgements passed on us are that we are weird, difficult, faulty, useless, damaged, bad, worthless, etc.  It’s not generally something that anyone wants to be or have - which you can tell by the fact that people are worrying about the evidence that it seems to be on the rise; and that there are scientists out there trying to find a way to eradicate it.  It doesn’t make you feel warm and welcomed to the planet, I have to tell you, when the thing that is part of the very essence of who you are is judged to be some kind of undesirable abnormality.

And so we come to me.  It’s very difficult not to absorb all of this negativity (especially when you’ve kind of invited it in by going looking to see what other people have to say about autism and adhd), so it shouldn’t really be a surprise that, despite all of my positive speeches about how I’m merely different not faulty, and created by God, etc, I have yet to really accept my differences, and I frequently resort to judging certain aspects of myself harshly, mainly because I feel that they are getting in the way of me making any progress.

Except that the progress I seem to be trying to make is in becoming less like myself, and more ‘normal’ ie non-autistic/adhd.  I choose to measure myself against non-autistics, and look to them for ideas about how to deal with life.  Is it any wonder I have a difficult time?  It’s like asking an oak tree to be a sunflower: it cannot do it, and to try to do so would leave it stunted and deformed.  And boy do I frequently feel stunted and deformed.

I think the major aspect that I struggle with is the issue of having acute sensitivity, because it encompasses things not apparently obvious to me when I was first diagnosed.  I thought it was only about things like hearing (noise can distract me and drive me nutty, so I spend a large proportion of my time either wearing earplugs or headphones, and listening to brown noise - like white noise, only a different colour); taste (I am EXTREMELY sensitive to sugar, in any form - artificial or not - including fruit, and all the other ‘healthy’ variations); and touch (eg my sensitivity to the weather).

What I didn’t count on was being sensitive to other peoples’ emotional energies, peoples’ opinions (which combines with me being literal, gullible, and serious-minded), and the electro-magnetic emissions emanating from some electrical devices: which, along with my distractability, causes me massive problems, particularly when using the internet.  Which I don’t want to admit, or accept, ‘cos I’m obsessed with it.  Like I once was with alcohol.  And sugar.  And television (another electronic device).  Bugger.

So I guess this possibly contributes, in part, to an explanation of why I experience such rapid sensory overload.  At least it sounds quite feasible, though I’m not quite certain.  As I said in the introduction to this series, I have no definitive answers: I’m just making this up as I go along.  But then neither, it seems, does anyone else know for sure.  So I guess it’s okay for me to shove in my twopenn’orth.  After all, it does affect me.

I also have a thing about plans.  I want to be a person who can devise and follow a plan.  The amount of sites I’ve read about planning could sink a battleship.  I am obsessed with plans.  I’ve been obsessed with them since I was a kid.  And they’ve never worked for me.  Why would they work now??  (I need to make clear here that I am not referring to my daily routine, which includes the stuff necessary to keep my life ticking over - things like yoga, eating, bathing, and suchlike.)

Fortunately for me, in AA we have something ultimately better, which is called living one day at a time, and following God’s guidance for us.  And, interestingly, God never informs me of what’s in store for the week ahead (never mind the month, year, or decade).  S/He/It doesn’t even let me know what They want me to do for the rest of the day.  I guess They know, and accept, better than I do that if there’s a plan to follow I’ll deviate from it: which is why They provided me with a solution that doesn’t force me to have to try to do something that I cannot do, ‘cos God isn’t interested in making my life difficult.  I do a good job of that myself.

So, no, when it comes to certain things about being autistic and having adhd, I don’t want to be different.  But what I want, and what I need, are two separate issues, and I guess God had good reason for creating me this way.  And though it makes sense, I can’t say it makes it any easier to accept. *grumpy sigh*
Posted by Lisa - The Artistically Articulate Autistic at 2:50 pm